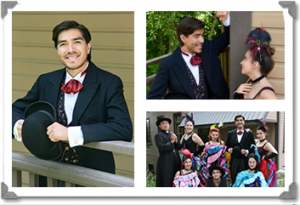 Fernando RJ was born in Toluca, México. He first came to Canada at the age of 16 through the Nova Scotia International Student Program. He became part of the Jazz Band at school and the Mahone Bay Legion Band. Upon his return to his hometown, he kept studying musical theatre and took workshops in Mexico City and even one in New York. He has played diverse roles in community theatre plays including Gaston in Beauty and the Beast, Sebastian in The Little Mermaid and Bill Austin in Mamma Mia. He finally decided to pursue acting professionally and enrolled in the Musical Theatre program at the Canadian College of Performing Arts in Victoria from which he has recently graduated.