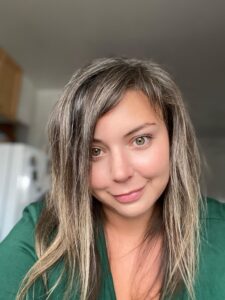 Andrea was a member of the Follies cast in 2009 and 2010, while also choreographing for the show in 2010 and 2011. During that time, she was finishing her Bachelor of Fine Arts in Drama at the University of Calgary, after having switched from a Kinesiology degree. The call to the stage was too strong to ignore. She then went on to receive a diploma from the Randolph College for the Performing Arts in Toronto where she played such roles as Piggy in Lord of the Flies, and The Baker’s Wife in Into the Woods. She continued her acting career in musical theatre in Toronto and in Calgary, performing in a variety of shows from more classical musical theatre like Oklahoma! and Cabaret, to more modern shows like RENT and The 25th Annual Putnam County Spelling Bee. In 2018 Andrea went back to school in Calgary and graduated with a Bachelor of Education during the pandemic. She was lucky enough to start her teaching career as a Drama Specialist, where she gets to share her love of theatre with her students every day.

“Growing up in Rossland and watching The Gold Fever Follies every summer was a staple of my childhood. I felt such pride and excitement when I had the honour of performing on the same stage. It was the first time I was paid for my craft as an actor, and it helped me discover my voice as an artist and sometimes even a comedian. It also gave me an opportunity to choreograph my first musical, which gave me the confidence to ensure it wouldn’t be my last. The Gold Fever Follies provides a fun, and professional environment for young actors to explore their talents and expand their skills as triple threat performers. The show is an integral part of Rossland’s rich history in the arts, and it is an educational and entertaining production for the whole family.”