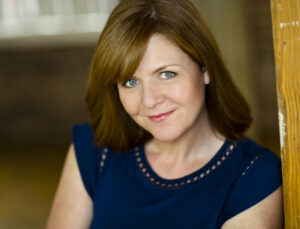 1992
(submitted 2022)
“I was raised in the Kootenays—my family lived in Montrose and I attended high school in Rossland. I became involved with theatre and acting in junior high and quickly became completely enamored with the craft. Finding opportunities in a small town to hone my craft was quite difficult as there were limited resources to support young actors. Luckily, I had a wonderful drama teacher in high school, Lisa Henderson, and she helped me to seek out workshops, performances and competitions to enhance what I was learning with her in school.

I moved to Vancouver after graduation and attended a two-year theatre program at Douglas College. In the summer break during college, I returned to the Kootenays and auditioned for The Gold Fever Follies. I was thrilled to be cast in a role! It was very challenging for me as I didn’t have a background in singing and dancing. Of course, the Follies is really for triple threat performers, but I worked hard and was able to learn cancan dance numbers and a variety of songs for the show.

It was my very first professional acting role, and it was truly a wonderful experience. It’s one of my favorite summer memories and will always hold a special place in my heart. Those months performing gave me a great deal of confidence and I truly felt there had been tremendous growth in my abilities as a performer.

Since the Follies, I have continued in my acting career. I have performed in over fifty plays, and been in numerous commercials, television shows and films. I was the lead in a feature film which was an official selection of the Toronto International Film Festival, one of the most prestigious festivals in the world.”

I have spent the last decade teaching acting to children as well as doing communications coaching with foreign trained medical professionals. Currently, acting has brought me to Beijing, China. I am in rehearsals to play a role at Universal Theme Park.

The Gold Fever Follies is a gift to the Kootenays. It’s a special show and year after year, it just keeps getting better. Not only are the shows wonderful entertainment for people to enjoy locally, but a worthy attraction for tourists visiting the area. Also, it’s a wonderful way for young performers to have one of their first experiences on a professional stage. I have had many amazing opportunities during my life as a performer, but I will never forget the experience of the Follies.
– Nicole Fairbairn