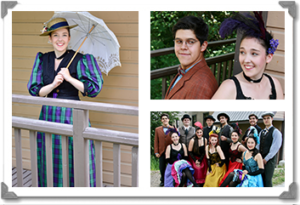 Chantelle is thrilled to be a part of the cast and to be choreographing the show on the Gold Fever Follies stage this summer! She has been performing since she started dancing at the age of three and hasn’t stopped since. She now shares her passion of dancing by teaching at a dance studio in her hometown, Langley, BC. Chantelle is a graduate from the Musical Theatre Program at Capilano University and, most recently, has achieved her Bachelor of Performing Arts at Douglas College. She has taken part in workshops with Disney and performed in Disney’s Dance the Magic Parade. Chantelle’s recent credits include Anne of Green Gables (CapU Theatre), Dark of the Moon (Arbutus Studio), Jesus Christ Superstar (URP), The Drowsy Chaperone (Theatre Under the Stars) and The Secret Garden (Arbutus Studio).