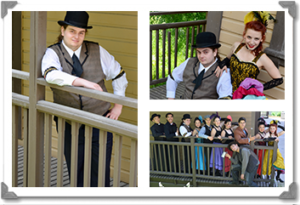 Kevin, who is a graduate of Selkirk College’s Contemporary Music & Technology Program, is excited to return for his third consecutive season with the Follies. This year he has the pleasure of composing and directing the music for the production, as well as accompanying and performing alongside his fellow thespians. He’s been actively involved in the theater for 10 years, and most recently performed the role of Patsy in the RLOP production of Spamalot.